CCR Data ‘cleans up’ with major US software deal

The deal with Blackbaud’s European distributors gives CCR Data exclusive rights to its The Raiser’s Edge software, which is used by around 70 per cent of the UK’s registered charities. CCR Data was set up in 1996 and now employs 24 people at its Amesbury site on an annual turnover of £1.1 million, with several blue chip clients in the retail, travel, financial and arts sectors. It specialises in “cleaning” data, which includes removing duplication, deceased and gone away records from company databases which are being used for mailshots. The firm is also one of only a small number of licensed bureaux with access to the Royal Mail’s National Change of Address redirection list. 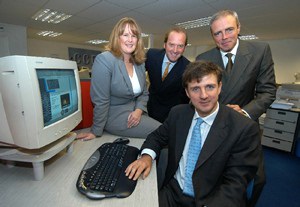 “ Businesses are now waking up to the fact that the latest Data Protection legislation means any data they hold needs to be as clean and current as possible,” says CCR Data sales director Edward Spicer. “ Although many people think their data lists are in a good condition, it is a fact of life that whenever a human factor is introduced to a process, mistakes are made. This is especially pertinent to organisations such as charities, which are constantly mailing people to ensure that donations keep coming in. “ It is therefore vital that the data they hold is up-to-date. Often the cost of cleaning can be justified immediately by the money being saved on postage, and this is where The Raiser’s Edge comes into its own because it can ‘keep track’ of a customer’s donations once they have been captured. Thousands of charities use Blackbaud’s software, and this agreement will really boost our revenue stream.” Henry Sykes, CCR’s business development director, said: “We were first introduced to Lloyds TSB Commercial Finance in 2000 when the company was going through a period of growth, and they were able to offer us a solution that allowed CCR to continue its development. Their support has enabled us to take on some larger projects and get involved in the charity sector which has led to this exciting new channel.”